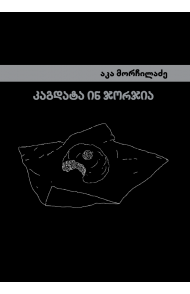 We present, for the first time as a separate printed edition, the essays of contemporary Georgian writer Aka Morchiladze: Kagdata in Georgia (2008) and Personal Encyclopedia (2007).

Aka Morchiladze (Giorgi Akhvlediani, 1966) – Georgian writer, historian, bestselling author. In 1988 he graduated from the Faculty of History of the Tbilisi State University. He currently works at the university. In the beginning of the 1990s, he worked covered parliamentary sessions for the daily newspaper Rezonansi. He also wrote for Georgian tabloids. Currently he is a freelancing contributor of essays in Georgian newspapers and magazines. In 2008, Sa.Ga. published his collection of essays Kagdata In Georgia. He is the author of the books: Journey to Karabakh (1992), Flight over Madatov Island and Back (1998), Santa Esperanza, (2004), The Secret Keeper’s Belt (2008), etc.