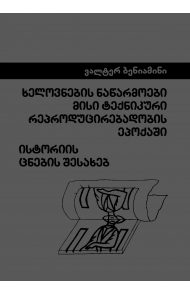 For the first time Georgian readers have the opportunity to get acquainted with two of the most important works by German-Jewish philosopher and cultural researcher Walter Benjamin (1892-1940): The Work of Art in the Age of Mechanical Reproduction (1935-1936) and On the Concept of History (1940).

The first essay offers an explanation for the loss of the aura of works of art and explains this phenomenon by the arrival of technical reproduction. This text gained a special significance in the 1960s, and it basically became a call for art to be used not for fascism but rather to help bring about socio-political emancipation.

The thesis On the Concept of History summarizes the purpose of historic materialism in the contexts of the unorthodox Marxism of the period.

This edition of Benjamin’s work is accompanied by an analytical text by German critic Christoph Hesse: Walter Benjamin and the Frankfurt School.