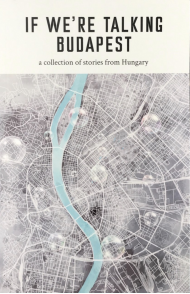 If We're Talking Budapest is an anthologized collection of short stories, written by Hungarian and international writers who have resided, or currently reside, in Budapest. This is the first book to be published by the Panel Literature association and Panel magazine. It was only natural that we should choose Budapest as a “theme” for the first prose anthology; Panel magazine’s core team met in Budapest, and it is where they still live. It is also a city that is perpetually worth being examined, written about and explored. Every story provides a unique perspective on its bars, baths and bridges—through unlikely events, fascinating characters and existential reflections.

An interactive map of Budapest will allow readers to dig into each story, using multimedia and art tools; by clicking on their corresponding location, users can view linked short films that will pop up and can be watched in full screen. Through this feature, readers will be able to locate the places in Budapest where the anthology’s stories are set, and vice versa: users can explore Budapest with the map and find stories set in their favorite locales. The map is slated to become the central theme of the collection, and will be used on the book’s cover.

All stories are in English. Those that were originally written in Hungarian, have been translated exclusively for this publication.