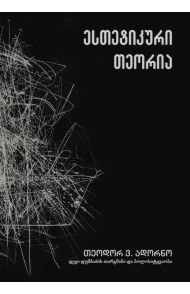 Aesthetic Theory by the German philosopher Theodor W. Adorno is one of the most important works by the author, if not the most important one. The book was published in 1970 posthumously. The present edition is the first Georgian translation of this critical work of the 20th-century philosophical aesthetics. In this book, Adorno extends his philosophical and sociological critique of modern society by an argument presented in a paratactic style: Because the historically formed instrumental reason is limited, its theory itself must change – has to become aesthetic, as it were. Aesthetic experience – a form of unregimented mimesis – which remains possible via modern art and the beautiful in nature, is manifested as a critique of the all-encompassing reason of the commodity society. The book discusses the situation of contemporary art, established theories of art, the notions of the beautiful in nature and art, appearance, the ugly and the dissonant, semblance and expression, the metaphysical truth encapsulated in art, and its subject-object relation. It deals with theories about works of art and its origin, as well as the relationship between art and society. The book closes with a critical essay by the translator and publisher Devi Dumbadze, Art and Salvation. Theodor W. Adorno's Aesthetic Theory.