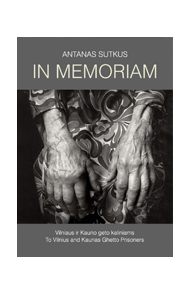 The In Memoriam series depicts those few who survived the Holocaust in Lithuania, implying the horror of dramatic reality half a century after the event. It confirms the deeply humane gesture of the photographer who captures memory and time as they open up to understanding, redemption and rebirth.

The text includes essays by Leonidas Donskis and Kamile Rupeikaite, and interviews with the last living survivors of Kaunas Ghetto.